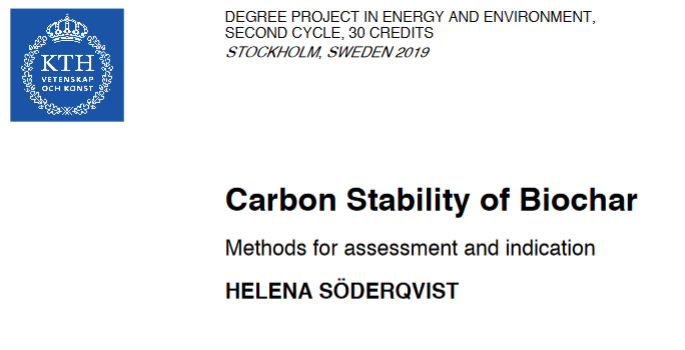 Biochar can reduce the amount of CO2 in the atmosphere and is acknowledged as one feasible technology for negative carbon emissions. The stability of carbon in biochar is of major importance for the carbon sequestration value. A method for confident estimation of the stability is needed to make efficient priorities for the climate. The aim of this study is to identify the best available method that can be used to indicate the stability and quantify the carbon sequestration potential of biochar. The result builds on a literature review of the current state of scientific knowledge and the proposed method is tested with data from previous studies and then applied to the case of Stockholm Exergi.

Biochar has a stable carbon structure, always more recalcitrant than the biomass that it derives from. However, estimations of how stable the carbon are varying a lot in the literature. Biochar is not unambiguously defined, there is rather a range of materials with different stability and the degradationis context dependent. Further discrepancy in the estimated stability derives from different experimental design and approaches to modeling the data. There is a challenge to do a proper estimation of the actual degradation, due to the long time perspective and the complexity of observation of behavior in a naturalsystem.

A functional method to indicate the stability of carbon in biochar is needed because a biochar producer cannot conduct a long term trial to prove the carbon sequestration potential. Several methods have in theory the ability to indicate stability. However, the H/Corg model with the expression BC+100 emerging to be the best suited method due to its connection to measured degradation, accessibility and acceptance. The H/Corg model could be further improved by calibration and validation by collecting existing data from previous assessments. Communication of the carbon sequestration after hundred years compared to other carbon sinks should be improved to better reflect the long term carbon sequestration value of biochar.

Stockholm Exergi is planning for a biochar production of 5 000 ton/year. The H/Corg method estimate that this corresponds to 9 000 – 11 500 ton CO2 per year, stable for at least hundred years. The widerange in the result derives from the different interpretations on the H/Corg method, where the different interpretations derive from the variation that previous research result shows. This is an incentive to support further development of the method. The sequestered carbon in biochar must be protected in its application to ensure the carbon sink in a trade system. Biochar in soil, green areas and concrete face the risk of being dis/re-located. However, that is not a threat to the carbon sequestration value. Biochar and biochar in a soil product sold in bags cannot account for the biochar sequestration value detached from the product, because of the risk of incineration.

The future development of biochar stability assessment should in a short term assemble the existing knowledge of conducted trials and use that with knowledge of what approaches that best corresponds to the real stability of biochar. This could decrease the observed variations in the stability assessments and be used to calibrate and validate methods that could indicate stability. In the long perspective field trials and incubation trials should be done in a standardized way to assess the degradation, designed according to best practice with long trial times and consciously extrapolated data.