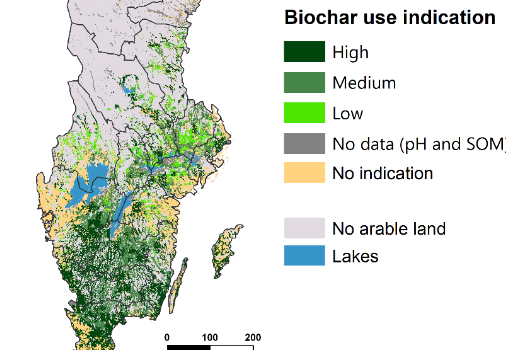 Biochar, the solid product of thermal conversion of biomass with little or no available air, is acknowledged as a carbon dioxide removal technique and soil enhancer among other applications. Its potential soil enhancing properties consists of increased water and nutrient holding capacities, liming effects and sorption of pollutants. However, not all soils benefit equally from biochar amendments. The thesis aims to investigate the suitability of biochar applications to agricultural soils in Sweden and communicate the results visually with a biochar indication map, illustrating where biochar could serve the highest benefits as a soil improver. A literature review was carried out to analyse the soil enhancing opportunities of biochar applications, which determined that the criteria soil texture, nitrogen leaching, ground moisture, soil pH and soil organic matter (SOM) were suitable for the analysis in a Swedish context. Then, a multi-criteria analysis was conducted in ArcGIS, based on spatial data of these criteria. Each arable land block was assigned a biochar class, varying from high indication to no indication. Arable land was considered highly recommended for biochar applications if the soil texture was sandy and at least one of the soil criteria was beyond a limiting agronomic threshold. At the national level, high indication for biochar application occupied 24.2% (528 thousand ha) of the arable land in Sweden, while the remaining land had either medium indication (13%), low indication (3.5%) or no indication (59.3%). Despite spatial variations, all Swedish counties (with data coverage above 84%) had at least 2% of high indication arable land. In particular, 66.1% of Halland’s arable land showed high indication. In turn, Skåne had the largest area (148 thousand ha, 35.7%) with high indication for biochar applications. The corresponding biochar volume potential, at the national level, suggested that between 0.5 and 26.4 million tonnes biochar can be applied to arable land with high indication for biochar applications, given application rates between 1 and 50 tonnes/ha over a 20 year timeframe. This means that arable land in Sweden can accommodate for a future production of 500 000 tonnes per year, which was suggested as an upper limit in an inquiry from the Swedish government, if application rates remain below 20 tonnes/ha. The multi-criteria analysis performed includes several subjective choices and uncertain parameters (criteria combination, data accuracy, agronomic thresholds, and classification scheme). Therefore, the biochar indication maps cannot yet be used for farm- or field-level recommendations for biochar applications. Nonetheless, despite uncertainties, the national- and county- level indication maps may still provide interesting order of magnitude. More field experiments are needed in Sweden as well as a more detailed analysis. To be able to make more precise recommendations, the present analysis can be refined by connecting all criteria to physical agricultural mechanisms and to the properties of biochar, and by using spatial data with higher resolution or even field-level data. This said, models need to be validated with experimental data, which is to date, non- existent: controlled biochar field experiments are therefore needed in Sweden.